Back in April, I made my nephew a memory bear and a car-themed birthday cake for his second birthday. Last week, my son turned two; with him also being car-mad, I felt obliged to recreate the car cake for his birthday party at the weekend.

I baked the two sponge cakes to make up the cake on Friday afternoon. However, when I cut into the first one, it was still raw inside. So, at 9pm the night before the party I had to start again, sending my husband out into the dark and cold for more butter. (A week of baking disasters, if you saw my last blog post.) This also left me in the slight predicament on Saturday morning of having a cake to ice whilst looking after a two-year old (my husband had to work). Fortunately, my Mum came to the rescue and took over childcare, leaving me free to ice the cake. Two hours later, it was done. It tasted pretty good, if I do say so myself.

Now that I’ve finished the baby cardigan I spent aaaaaaaaages knitting, I needed to think about what’s next. My ‘to do’ list is as follows:

Plenty to be getting on with then 😬

I’ve often wondered what had become of the giraffe quilt I made for my niece. Tonight, I was delighted to receive a photo of my niece with said quilt. It’s helping her keep warm at night. That’s made my day, if not my week!

Next up, the pattern suggested adding a crochet edge, buttons and buttonholes. It’s been a while since I crocheted, so it was lucky that I had my weekly lunchtime pub craft date with ThePolkaDotGiraffe. I was soon on my way. This cardigan is intended for a friend’s baby. She is due next week. So, for regular readers, something amazing has happened – I’ve finished something ahead of schedule! She doesn’t know if she’s having a boy or girl, so I needed to choose some unisex buttons. I was going to go for yellow ducks, but then I stumbled across some teal ducks in John Lewis and had to buy them. Anyone who knows me, knows my love of the colour teal. My mother in law calls it ‘Kate’s colour’. So, buttons purchased in ‘my’ colour, I finished the cardigan last night.

I’m really pleased with how it’s turned out. It’s no exaggeration to say that I’ve found the pattern (Garter Stitch Cardigan from Lullaby Knits) challenging. I started knitting this in June and have taken several breaks from it, and almost thrown in the towel. I’m glad I persevered and confronted my fear of knitting things that need sewing together.  I may even make another for a friend who is expecting a baby next month.

From a success to a failure. A colleague recently offered up cooking apples from her garden, and I ended up with a bag of 20 apples. Having made two of my trusty Dorset Apple traybakes (which always go down a treat in the office), I was on the hunt for other apple-based recipes. Apple rose cupcakes were suggested to me, I think these are a bit of a trendy bake at the moment. These are a puff pastry dessert in which very thin slices of apple are rolled to make a rose effect. I made two errors: my puff pastry was too thick and my apple slices weren’t thin enough. They didn’t look too bad before going in the oven. 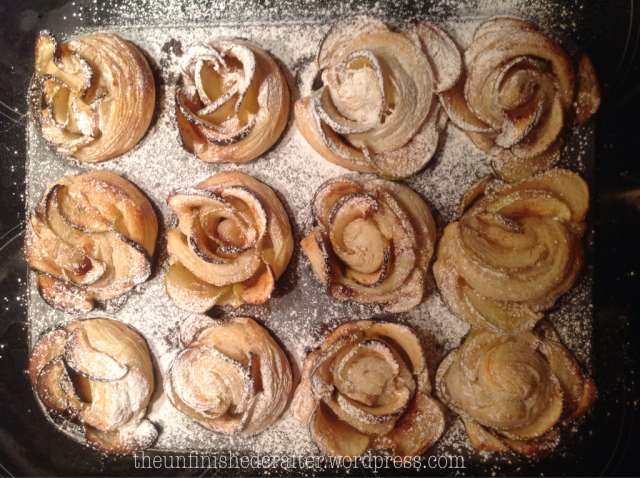 Unfortunately, despite a second stint in the oven, the pastry was still raw in the middle. And the apples were burnt on top. They had to be binned 😢

You win some. You lose some.

To end on a happier note, the birthday card I made to appear on children’s TV for my son’s birthday made the cut! His card featured on CBeebies today. Whilst my now 2-yr-old was somewhat ambivalent to this momentous occasion, I was beside myself with excitement.

That’s all from me for now. Do you have a recent success or failure you’d care to share?

Now, where did I leave things … I had started knitting the first sleeve of the garter stitch baby cardigan I started back in June. Hence the title of this post 😊.

Well, nearly a month on, I now have two sleeves knitted. So, next up is putting it all together. Gulp. Time to procrastinate – my usual approach when I don’t know what to do next. Oh, and I need to weave in the ends too. Another thing I hate doing!

So, I’ve started work on a secret project. Also of the knitting variety. I don’t think said recipient reads this blog, but just in case, I shall keep schtum. This is as far as I’ve got. The deadline for this is next Fri, and then I’ll have to return to confronting my cardigan-assembling fears. 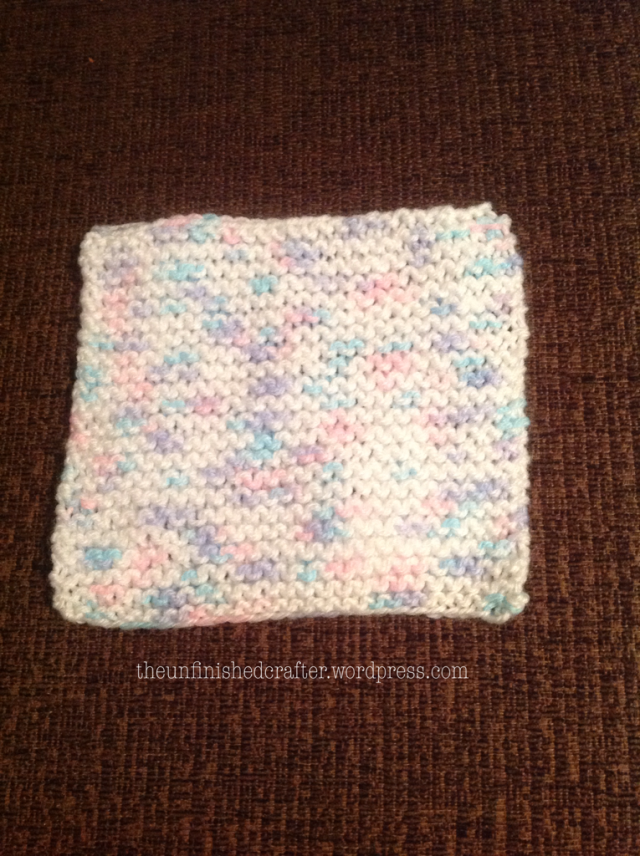 I’ve also been baking again. My son turns two in a couple of weeks and we’re now at the tail-end of five 2nd-birthday parties in the space of three weeks! Today, he had a joint party with 7 of his friends. Ideal, as we split the cost of hiring a brilliant venue near us called Little Street, which they then had the run of for 90 minutes. It is exactly as it’s named: a little street containing a mini supermarket, beauty salon, cafe, doctor’s surgery, building site, etc., in which the children can play. Anyway, I made the birthday cake for the party, utilising another of the number moulds my mother-in-law bought me. I made a chocolate sponge, iced it with chocolate buttercream and began decorating it with chocolate fingers, Smarties and white chocolate buttons. But, disaster struck. Last night, three packets of chocolate fingers later, I was only two-thirds of the way round the cake. And I was home alone with my son and couldn’t persuade anyone to do a chocolate fingers mercy dash for me.

I bought another three packets this morning and finished it off, using a touch of hot water to melt the icing a bit to make them stick. Voila! I had to cut the chocolate fingers down a bit as my sponge wasn’t very well risen and they looked a bit silly at full height. 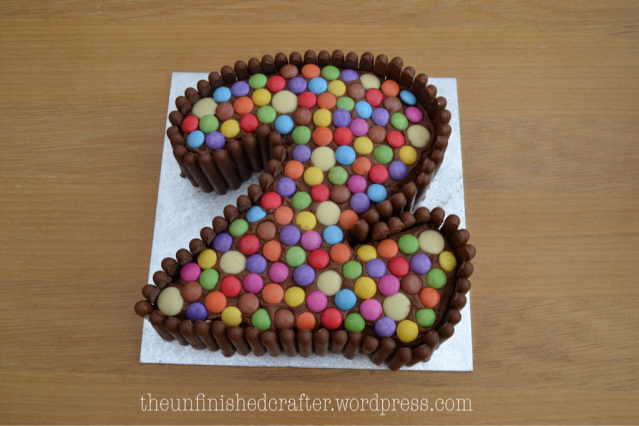 As an end note, a friend sent me this earlier, she said it reminded her of me! 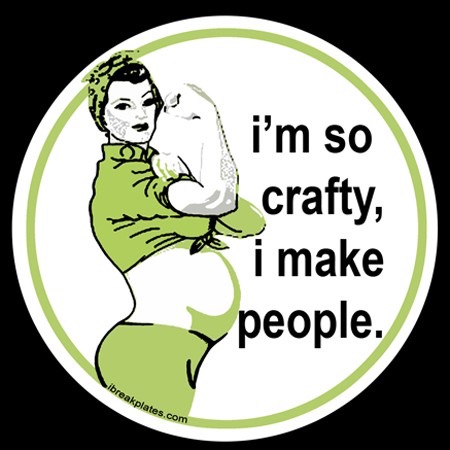 As an editor, the lower-case ‘I’ very much bothers me, but I like the statement. I’m currently 24 weeks pregnant and feeling the time pressures of finishing up a variety of craft projects before baby no.2 arrives I never have free time again.