I’ve been holding off from posting til I finished my nephew’s memory bear. Finally, he is finished.

Originally, I was going to make him out of these:

But, I just wasn’t feeling the colour combinations. I had a flash of inspiration that some of my nephew’s babygros had been passed on to my little boy. As luck would have it, they were too small for him. So, I changed tack and went for these:

I added in a complimentary polo shirt and wanted to keep the teddy saying ‘Hi Mum’. I felt this looked much better:

I struggled with how to transfer the pattern markings, however, I hope to remedy this for future projects with some recent Amazon purchases …

I made the same mistake as with my last (as yet unfinished) bear, in that I didn’t transfer the pattern notches properly. Rookie error! I’m very much a learn by making mistakes person! That said – apologies if this offends some out there – I’m not sure I see the need for matching notches on a project like this. Seems a hassle, when you can match up pretty accurately without them …

New stitches learnt as part of this project:

I raided my button jar for the eyes. I knew there was a reason I’d kept all these ‘spare’ buttons.

All that remained was to wash off my washable fabric pen. Every time, I curse myself for using it, as it never seems to come off as easily as I think. It’s just much easier to work with than chalk. For me, anyway. I was reluctant to put the teddy in the washing machine, as I wasn’t convinced my slip stitching would survive. So I went for the dampening option. Three separate attempts and two short stays in solitary confinement the airing cupboard later, there was still blue ink, so into the washing machine he went. Followed by a third stint in the airing cupboard.

Here’s the finished bear. Of all the things I’ve made over the past year, he’s one of my favourites. And reasonably quick to assemble too.

It was my birthday on Tuesday, and, for the first time, I created an Amazon wish list and sent it to my parents and my husband. All craft-based items. I’m not a lover of Amazon wish lists being thrust upon people; I don’t like being told what to buy someone. Unless I’ve asked for suggestions that is. But, being sent a wish list when I haven’t asked what someone would like? Well, I think that’s rude. Anyway, disappointingly, I got absolutely nothing from my wish list. But, I can’t complain as I was taken on a spa break to the lovely Ragdale Hall and treated to several lovely treatments. I did receive a couple of Amazon vouchers though, so I used them to treat myself to my wish list. Quite a few arrived today. Here’s the haul so far: 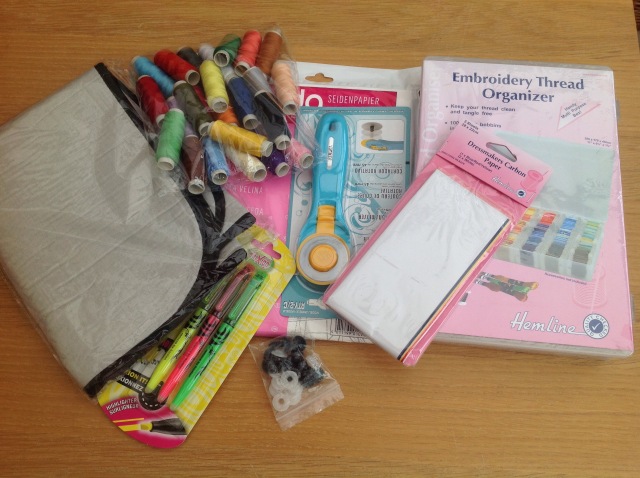 Excitingly, this week I also purchased the fabric to make bunting for my friend’s wedding in August. The colour scheme is ‘sunset’: pinks, yellows and oranges. Whilst debating the best way to cut out the flags with my friend, she wondered if you could get a pinking rotary cutter. And you can! So, I’ve ordered one. Excited to get started on this. I’m going to aim for 100 metres of bunting. Am I mad?!

I completed the Mummy Bear and Daddy Bear sleeping bags this week, so the set is now complete. All three sleeping bags went through the wash before being tested out by some willing participants.

The pattern, by Flossie Teacake, costs £5. I mostly used scraps, except for the Daddy Bear’s sleeping bag, for which I used a reversible duvet cover I picked up in a charity shop for £3.50. Obviously, I have plenty of leftover fabric from that to play with. Just as well, as I suspect I may be making a few more of these.

Here’s Baby Bear’s sleeping bag, which I made last weekend. 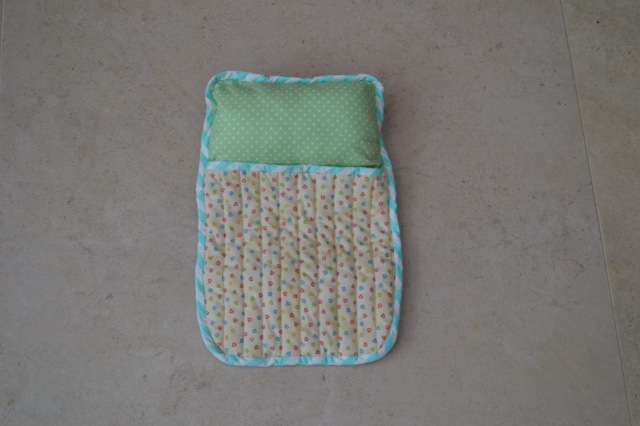 And, last but not least, Daddy Bear’s. 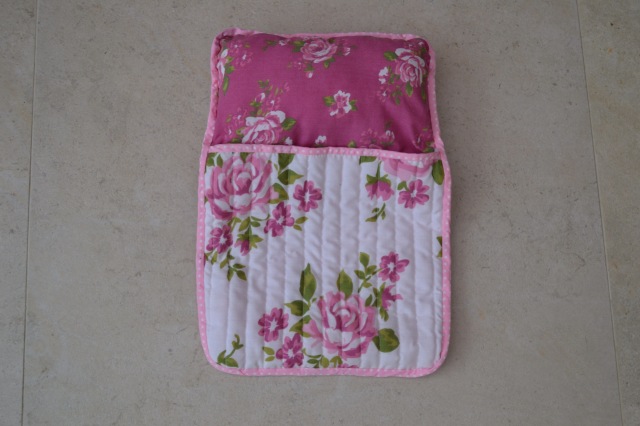 I think this one is my favourite.

The edges of the sleeping bags are a bit wobbly. I think, in part, due to me overstuffing the pillows. But, I like to have two pillows, so I was trying to ensure their comfort. And they do look cosy, don’t you think? 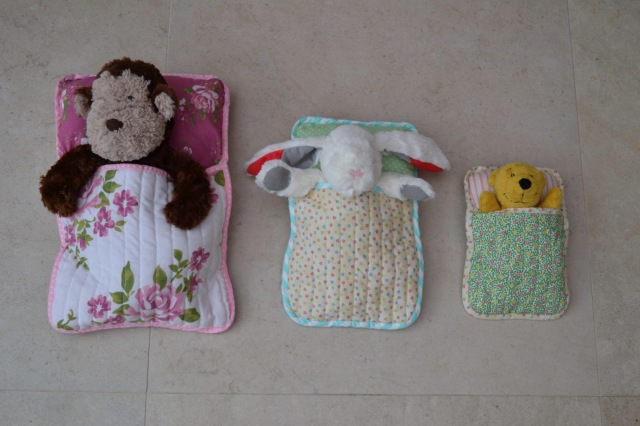 All that remains is to wrap them up ready for the birthday girl next week. Meanwhile, I have another blog post to write. Very excitingly – for me – this week I’ve been nominated for the Liebster by Jana at meandmyveritas. I’ve now got to do my post and choose some blogs to pass it on to. I’m a bit late to this party, so I may struggle to find blogs that haven’t received this award. But I have a few in mind 😉

In sleeping bags, of course! But more about that later.

New-project-itis struck again this week. Firstly, when I purchased a copy of The Big Comic Relief Crafternoon magazine on Thursday. As you know, I like a Crafternoon, so my Crafternoon buddies and I were very excited when we heard about this. Fortunately, Thursday isn’t a working day for me, so Little Man and I headed over to Sainsburys to get our copies (one for me, one for my Mum). Both of us are suffering with colds. So when LM went for his nap, I snuggled up in bed with my magazine. Perfect!

I was feeling very inspired after flicking through. However, I have my usual problem: too many things I want to make and not enough time. I’m tempted to change my name to The Impatient Crafter. Anyway, we’ve set a Crafternoon date, so I’ll have to decide on what to make by the time that rolls round.

Meanwhile, one of my many nieces turns 3 a week tomorrow. Naturally, I thought I’d make her something. Not forgetting I still haven’t made what I was supposed to be making for her birthday last year. Unfinished project no.3. Anyway, I offered my sister-in-law two options: a teepee or dolls’ bedding. She opted for the latter, as it’ll take up less space.

Daisy, my niece, is at that age where she’s really into dolls and looking after them. I was really excited to make some dolls’ bedding for her to play with. Having drawn a bit of a blank on a Google search, I scoured Pinterest for ideas. Amongst many other lovely things, I stumbled across Flossie Teacake’s three bears’ sleeping bags.

Yesterday morning, I had a few hours to myself so – having purchased the pattern – I cut out the pattern pieces and then selected the fabrics to use. All leftovers from my giraffe cot quilt, apart from Daddy Bear’s quilt, which comes from a duvet cover I picked up for £3.50 in a charity shop. Also, whilst charity-shop-hunting, I couldn’t resist this.

Perfect Mother’s Day present for my Mum, who loves poppies. If I get round to making it in time!

Back to the sleeping bags. After two hours, I had all the pieces cut out ready to begin. For each sleeping bag, there were three components – mattress, quilt cover and pillow. 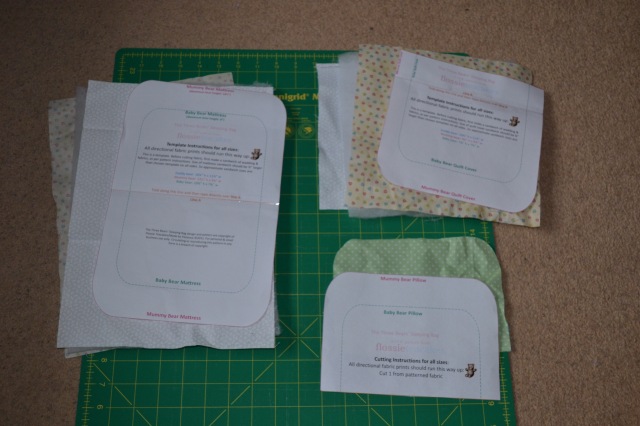 I decided to start with the smallest sleeping bag – Baby Bear’s – as a practice. The first step was to quilt the quilt cover.

Next, I had to make some bias binding. More leftover fabric used up. The first bit of binding went on the quilt cover and then the quilt cover was sewn on to the mattress. The pillow had been sewn on at an earlier stage – leaving an opening for stuffing.

Then I added binding round the edge of the mattress. By machine, then finishing by hand whilst catching up on this week’s Great British Sewing Bee.

This is the finished sleeping bag.

All it needed was a bear. 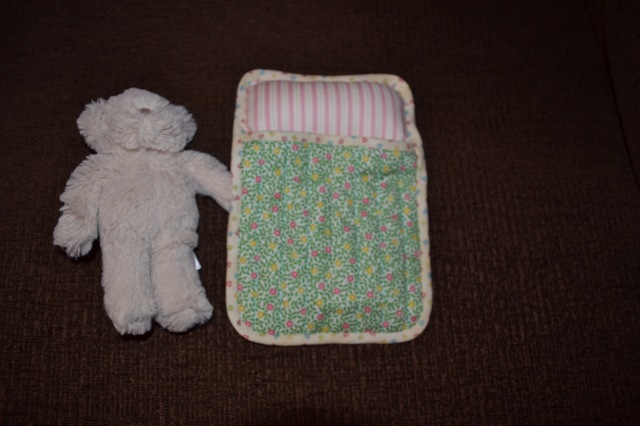 Mummy Bear and Daddy Bear’s sleeping bags to go. I should be able to finish them for the weekend.

Speaking of bears, when putting Little Man to bed, I found another candidate for the teddy bear’s hospital. 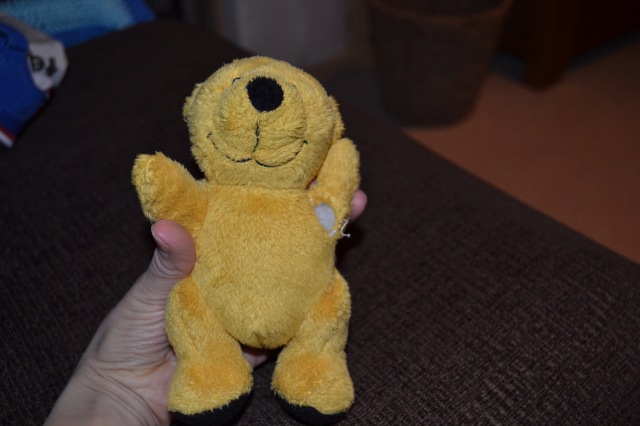 That’s the second animal to have its arm partly ripped off. We need to put a sign up: ‘Stuffed animals: enter at your peril’!