An emergency quilt meeting was held on Sunday night as I was struggling with the piecing. It was decided that the 9×9 squares should be cut down to 6×6, then we’d only have two sizes of squares to work with. “Can you just cut one down now?” my friend/client asked. “Sure.”

Lesson: do not talk and cut at the same time. I sliced a chunk off my left index finger with the rotary cutter. An hour and a half later, when the bleeding hadn’t stopped, I went to A&E. After waiting there an hour and not being seen, I came back home again! There was a three-hour wait and I didn’t fancy being there til 1am when my little man has been waking at 5:30am. So I went for the DIY approach.

Being right-handed, I didn’t think it would hinder me that much. But, even now, I keep forgetting that I use that finger to type. And I can’t. For now.

Anyway, previous to the incident, the deadline of today (!!) was relaxed. On the basis that the – now one-year-old – recipient wouldn’t know if it was late.

I cut the rest of the large squares down. And that’s all I managed all week.

Until tonight. I cut what I hoped was my last few squares. And started piecing again, according to what we’d agreed on Sunday night.

Still busy. At this point, I was in despair. Wanting to rewind time and not accept this commission. I sent a despairing message to my crafty friends and a suggestion came back: try blocks of 4 larger squares and blocks of 4 smaller squares. I tried it. 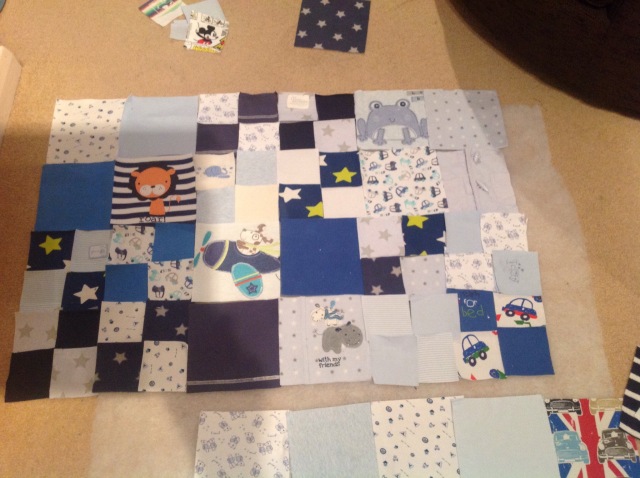 A big improvement! So I carried on. 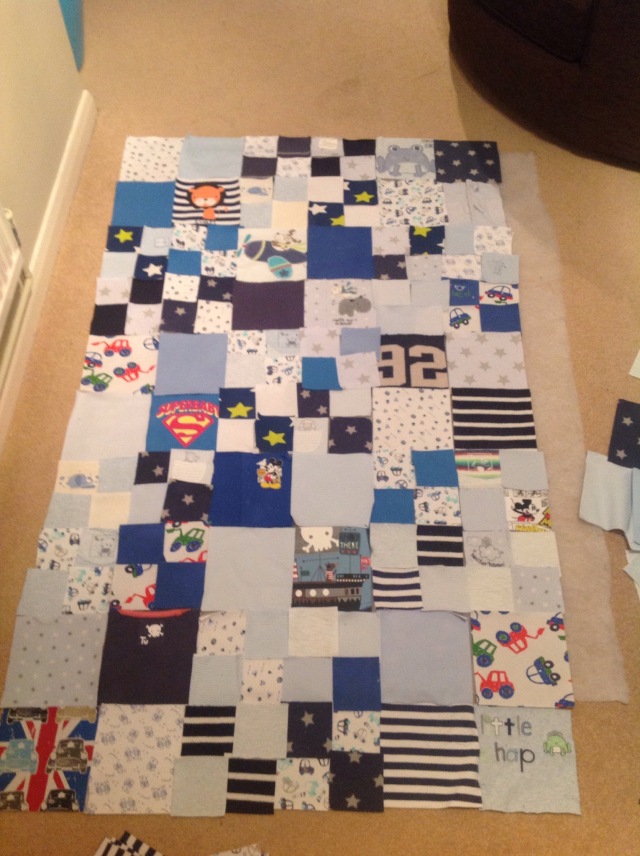 I’m going to pack it all away now, will start again next week. But am much happier with this type of formation. So glad my plea for help was answered! I’d be lost without my crafty friends.

Having finished my second pair of shoes, tidied all my craft stuff away, done the washing up and then Day 23 of the 30 day ab challenge (95 sit ups, 140 crunches, 55 leg raises, 85 second plank!!!) I’m now having a well-earnt rest on the sofa.

Today was a special day, a Crafternoon day! This is basically when some of my current and former work colleagues get together, eat food and a little craft gets done too. I’m trying to work out when we had the first Crafternoon, I think it was probably 2010.

A few of the girls at work used to go for coffee on a Wednesday lunchtime, we called it Coffee Wednesday. Original. We were celebrating reaching the halfway point of the week. We’d usually go for a pub lunch on a Friday too to celebrate the end of the week. Anyway, I think one of the girls asked if one of the other girls, a very clever crafter called Emily, would show her how to knit. She ended up teaching about three of us to knit. So a Coffee Wednesdays became Crafty Wednesdays. I’m so grateful for Emily for teaching me how to knit. It’s something I was never taught as a child; I feel I missed out! The first thing I made was a baby blanket for my yet to be born niece, Adelaide. She’s now 5, and since then I’ve made another 5 Big Bad Baby Blankets. They’re so easy to make, but, on average they take me about 3 months to knit!

Another colleague, Christin, another very clever crafter, taught Emily how to crochet and she’s crocheted many blankets since. One of which I was lucky to receive as a wedding gift and is one of my very favourite possessions. I’ll share it with you another time. Meanwhile, Christin has moved to the States and runs art classes alongside all her other crafting activities. You should check out her website. We were hoping to Skype her today, but timings didn’t work out.

As it proves difficult finding a weekend date everyone can make, we usually end up having only one or two Crafternoons a year. We always have a Christmas one, even if it’s in November. There’s usually a theme to the food; so far, we’ve done: Spanish, Greek, Italian. Today’s theme was English garden party. Basically sandwiches and cakes. I forgot to photograph the food before we started demolishing it. So here’s us (slightly staged with our crafts).

Amazingly, Emily and I managed to get our babies to sleep at the same time and we had a glorious 45 minutes of uninterrupted craft time. Emily did 3 rows of crochet, which she says is more than she usually manages in an evening.

Lucy had a go at loom bands and also sewed a couple of badges onto her Guides camp blanket.

I failed to get a picture of Kayleigh making loom bands. Kayleigh and a friend have been showing off their wares (which include magic wands, shadow puppets, hair clips and bibs) at various craft fares. Have a look at their Facebook page.

Meanwhile, I started a second pair of baby shoes as I wasn’t happy with the pair I made the other day. I finished them tonight. They were better and didn’t take as long. But, unfortunately, one shoe was bigger than the other.

And, Sleeping Beauty-style, I’d manage to prick my finger and get blood on the sole of one of them. 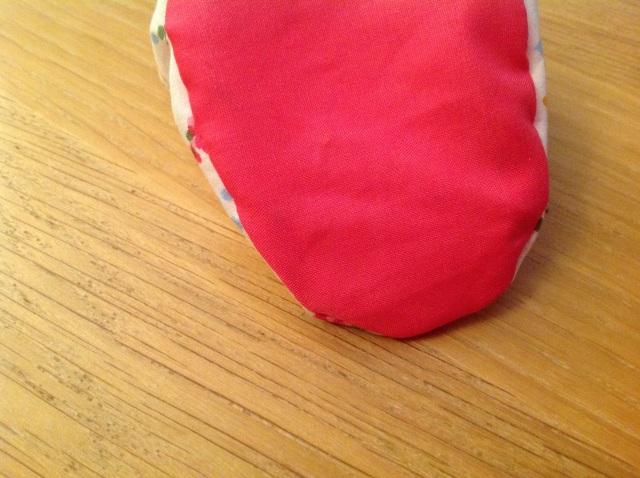 Fortunately, one of the shoes I made earlier in the week is a better match in terms of size. All I need to do now is buy some ribbon and attach it.

Sorry for the epic-ly long post, with not many pictures. I’m exhausted just writing it. Back to the quilt tomorrow. Maybe.